“We all dance away our lives to the tune of the sovereign pleasure-pain axis.”

Pleasure-seeking and pain-avoidance as a rave metaphor fits the music of Sam Barker. The Berghain resident and Leisure System co-founder has spent the last few years exploring the euphoric potential of altering key variables in dance music formulas.

This was especially true on his 2018 Ostgut Ton debut EP Debiasing, which was flush with unconventional rhythmic chord stabs, melody and percussion but devoid of kickdrums. What seemed like an experimental exercise on paper was in reality equally geared towards the club: tracks that worked for the floor but resisted the genre categorizations that kick drums often provide. This has come to define Barker’s sound.

Now, on his debut solo LP Utility, Barker turns his focus toward melding experimentation and dancefloor pragmatism with the psychology behind the musical decision making process. In his own words: “After ‘Debiasing’ it occurred to me that my musical decisions were often unintentionally utilitarian, following an instinct to maximize pleasure in one way or another. It’s sort of unfashionable to admit, but by removing elements that have strong genre associations, this became a natural consequence.”

Accordingly, Utility is a playful but non-ironic musical approach to a whole spectrum of utilitarian and transhumanist ideas: from models for quantifying pleasure and “gradients of bliss” to abolishing suffering for sentient beings (not just people) through the ethical use of drugs and nanotechnology. Over nine tracks, Barker’s vision ebbs and flows through waves of deeply psychedelic musical vignettes; free-floating and futuristic melodies and rhythms as targeted brain stimulation. The sound draws heavily on modular synthesis, as well as self-built mechanical instruments and plate reverbs to create atmospheres that are at once alien and emotionally recognizable, functional and utopian.

Utility is by no means a concept album. Instead, it is an honest take on music as both pleasure- maximizer and consciousness-expander. 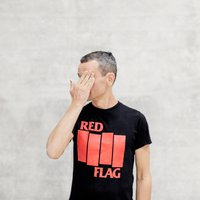